Berto International started its activities in August 2004, acting as an agency for products manufactured by national companies wishing to enter international trade.  It became specialized in the food sector, with specific focus in prospecting markets for snacks, cookies, chocolate, and candy.   Since then the company has acted as the agent of exclusive purchases and sales of Soberana Alimentos for the external market, representing it in several national and international trade fairs.

Thanks to the managers’ experience in foreign trade and in the manufacturing process the company has been appointed by its customers as the main office for the development of projects in own brand and global sourcing.  In 2005, it started intermediation activities of branded products from South America to the Middle East, Asia and Oceania, and since then it has been adding such products of massive consumption to its portfolio.

Broadening its operation, the company became a Commercial Importer and Exporter. It has developed specific projects importing candies and sweets never manufactured in Brazil before, and it has brought Pucker Powder® with exclusivity, in addition to other major brands in the segment.  Always seeking innovation, in the end of 22007, the company signed a partnership with Super-Pufft Snacks Corp, based in Canada, to develop the snacks sector in South America.

The quality of the services provided has made Berto International a reference in exports of food and shoes based on customized projects.  Thus, in 2008, it signed a partnership with a Spanish supermarket network to provide private label products and, in 2010, with a British company specialized in Fast Moving Consumer Goods. In the following year, Berto International took another important step in its history starting their own exports for several countries.

In 2015, the opening of an operational branch in Itajaí/SC contributed to the company’s port logistics and made the expansion of its activities possible.

In the year of 2017, it became the exclusive importer and distributor of PEZ® candy in Brazil.  Since then it has significantly expanded its portfolio of products sold nationally.

In 2018, with a significant increase of partnerships and business deals, Berto International designed a new and modern space, having its own facilities.

The company has constantly expanded the portfolio of products sold in the Brazilian and the international markets, being present in 5 continents.

CLICK HERE TO SEE OUR PORTFOLIO OF IMPORTED PRODUCTS

Itajaí/SC - Operational Branch
Located near the ports of Itajaí and Navegantes,
at the center of cargo distribution to all locations in Brazil.

In 2016, Berto International received the 44º Prêmio Exportação RS (44th RS Export Award) in the category Exporting Dynamism. It is considered the main event in the segment in the South of Brazil and it aims at highlighting companies that have stood out due to their innovative strategies to exhibit and trade their products in the external market as well due to the results they have reached.

Composed by 19 representatives of public and private institutions connected to the exporting market, the Board of the RS Export Award is responsible for awarding the prize. 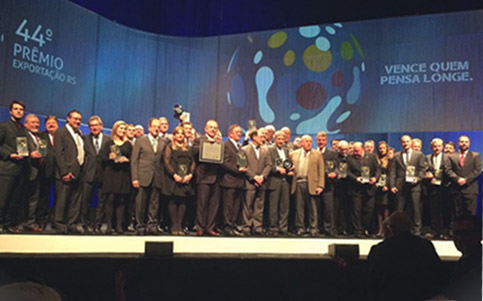 Identify opportunities and develop partnerships that prioritize quality, add value to the customers and provide unique experiences to consumers.

Commitment to the Customer

Negotiate products with certified quality and provide qualified services in the negotiations.

Develop the tasks avoiding waste without compromising the quality of the product or service.

Commitment to the Environment:

Avoid waste of materials and the production of pollutant waste.

Commitment with personal and professional growth

Support knowledge search actions, regardless of the theme.

Be equally respectful to everyone as human beings regardless of religion, belief or faith.

Fill in your data to see the catalog of